April 30, 2021 by admin
Celebrity News, Music
JT and Yung Miami are ready for the summer.

April 30, 2021 by admin
Celebrity News, Music
As the Hip Hop community takes in the song, Lil Baby is taking his time dissecting the bars JAY-Z dropped to open his verse.

Jay-Z, Khaled & Nas Link Up in Official Video For ‘Sorry Not Sorry’

The boys are back. With each album release by DJ Khaled, fans have come to expect legendary music pairings. With his latest drop, Khaled Khaled, it’s business as usual as two rap heavyweights link up for an all new track.

On “Sorry Not Sorry” Nas and Jay-Z make no apologies for their hard-earned accomplishments, arrogance and accolades. The song and official video hit streaming services Friday (April 30) and has already gotten strong reactions on social media.

And of course, even Beyonce’s brief vocals on the track caused a stir.

It’s been quite a year for Nas and Jay-Z. Last month, Nas won his first Grammy. The Queens rapper took home the award for Best Rap Album thanks to his 13th studio release, Kings Disease. It was a long time coming for Nas, who has been nominated for a Grammy 14 times throughout his career.

Jay-Z hit a major payday through moves with his streaming service and champagne brand. On February 22, Moet Hennessy announced a fifty percent partnership deal with Jay’s Armand de Brignac Champagne, better known as Ace of Spades. According to Forbes, Jay had received up to $300 million dollars from Moet Hennessy for half the ownership.

Get Breaking News & Exclusive Contest in Your Inbox:

Close
Thank you for subscribing! Please be sure to open and click your first newsletter so we can confirm your subscription. 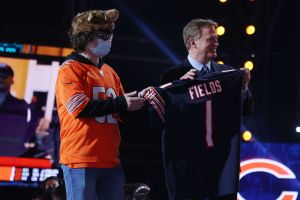 Ohio State QB Justin Fields is headed to The Windy City. In Round 1 of the NFL Draft, Fields was selected 11th by the Chicago Bears. A Heisman Trophy finalist and Big Ten Offensive Player of the Year, Fields made quite an impression with The Bears.

“This guy’s toughness on a scale of 1 to 10’s an 11, and you just love that about him,” Chicago Bears general manager Ryan  Pace said after Thursday night’s draft.

“We feel really fortunate to be able to get Justin in the area of the draft we were able to select him. The excitement throughout our whole building, you can feel it as I walked down here tonight,” Pace said. “We knew there was gonna be a sweet spot for us to be in that quarterback world, and this area was kind of it. So it just required a little bit of patience to get to that point.”

The Bears made a draft-day trade with the New York Giants, going from No. 20 to No. 11 overall to position themselves toward a chance at Fields. Chicago sent the No. 20 overall pick and a fifth-rounder this year (No. 164 overall) in addition to 2022 first- and fourth-round picks to secure its quarterback of the future.

Fields expressed excitement toward the next chapter of his football career.

“What’s up Chicago?” He said in a video shared online. “Justin Fields here.. excited to be a part of the organization and I’m ready to get to work. Bear Down.”

While Andy Dalton is still the team’s head quarterback, Fields is confident what it takes to become a franchise star.

“You know, just the way I carry myself, just the way I care about the game, the grit I have, the determination I have to be great,” He said when asked by reporters why he believes he is an ideal fit for Chicago. “I think nobody has the story that I have. So just everything inside of me, just wanting to be a great quarterback, wanting to be a franchise quarterback. And just me dreaming for this moment my whole life. So I just think all of those intangibles, my work ethic and all that together will of course be different for me.”

DJ Drewski, A Boogie Wit Da Hoodie, Coi Leray, & More Aren’t Asking Anyone For A ‘Seat At The Table’

April 30, 2021 by admin
Celebrity News, Music
‘Seat At The Table’ could’ve been an album all about DJ Drewski and his big-name rapper friends, but the New Jersey native didn’t want to highlight the people who already earned their spots.