Kanye West Banned From Grammy Awards Due To His ‘Online Behavior’ Rapper Kanye West removed from the list of performers at the 64th Grammy Awards due to “controversial behavior on the Internet.” The decision may be related to the musician’s insults to host Trevor Noah on Instagram
Rapper Kanye West has been banned from performing at the Grammy Awards due to his “controversial online behavior.” This was reported by Variety, citing a comment by a representative of the artist.

According to a representative of the musician, the organizers of the award contacted West’s management on the evening of March 18, saying that the rapper “unfortunately” was excluded from the lineup of performers on the show due to his “controversial behavior on the network.”

As Variety notes, the decision may be related to racially motivated slurs against the host of the upcoming award – Trevor Noah – on Kanye West’s Instagram account on March 18. Then the rapper’s account was blocked for 24 hours due to violation of the platform’s policy regarding hate speech, bullying and cyberbullying. During the day, the musician could not publish, comment or send private messages.

The 64th annual awards ceremony will take place on April 3 at the MGM Grand Arena in Las Vegas. The line-up for the 2022 Grammys was announced on March 15, including Korean group BTS, Olivia Rodrigo, Billy Eilish, Lil Nas X, Jack Harlow, and more. Kanye West, who released his tenth studio album Donda in August 2021, is up for five statuettes.

Earlier, the musician also stated that his new album Donda 2 will not be available on Apple, YouTube or Spotify – it will be possible to listen to it on the Stem Player, which was developed by the artist’s company Yeezy Tech. Thus, West wanted to “liberate music from a repressive system”. 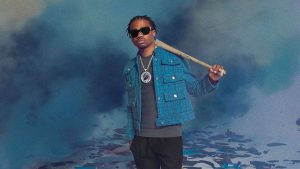 Roddy Rich exploded into the rap star stratosphere last year with The Box from his debut solo album Please forgive my antisocial behavior. The song peaked at number one on the Billboard Hot 100, where it stayed for an amazing 11 weeks and was awarded three Grammy Award nominations at the 63rd Annual Grammy Awards earlier this month.

But before The Box entered the playlists of all rap fans, Roddy had already received a golden gramophone for his collaboration with Nipsey Hussle and Hit-Boy Racks In The Middle in 2019. And it’s clear the Compton native cherishes this milestone in his career, unlike his hero Kanye West, who last September recorded urinating on one of his already 22nd Grammys, which he threw down the toilet.